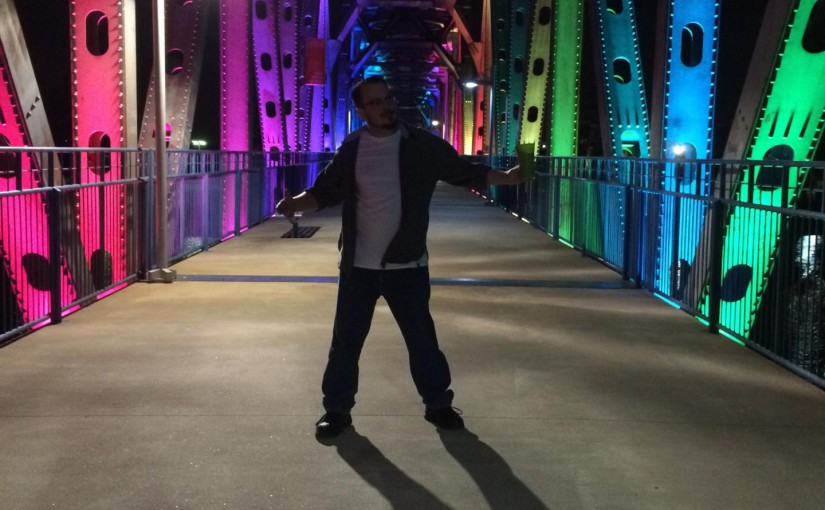 It only takes a few hours to get to Little Rock from the Mississippi River. Which is good, because as near as I could tell there wasn’t anything else in the state of Arkansas, coming or going.

Okay, that’s probably not fair. This was the state that gave us Johnny Cash and Bill Clinton after all. Of course, those guys met their greatest success directly upon getting the hell OUT of Arkansas, but what do I know?

In any case, Little Rock saw me meet up with Katie, one of my dearest and oldest friends, with whom I spent a whirlwind few days worth of frivolity, improv theater, pool parties, Netflix, and Moscow Mules. I think I remember about 80% of it, which isn’t too bad. A few high points:

A Wednesday evening found me enjoying some improv comedy at The Joint Theater and Coffeehouse. I’ve always felt that alcohol and interactive theater go hand-in-hand, which is I think how Shakespeare got started. I may have guffawed at least once that night, a rousing success for any entertainment. Usually I only guffaw at funerals. 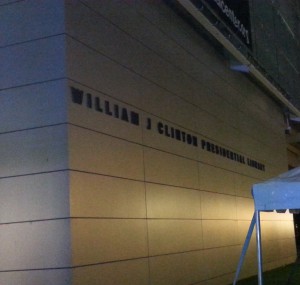 Unfortunately, I only got to take this building in from the outside. An exterior which, as someone pointed out, looks a little like a mobile home rolling into the Arkansas River. It seemed interesting, but I was disappointed to find out there was no attached strip club. I think they really missed an opportunity there.

Pico was one of Katie’s room mates. As you can see, he’s a complete thug and runs the streets of Little Rock. He put me up on some major money hustles and showed me new methods to keep shit real. He’s down as fuck. Seriously, don’t get caught slipping in this dog’s hood, because he WILL regulate. Mad respect.

I’ve probably had too much caffeine today. 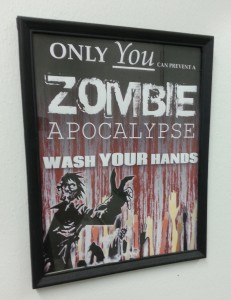 Seen in the bathroom of a North Little Rock coffeehouse. It’s good to know they’re doing their part to keep the city prepared. 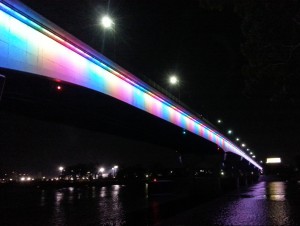 My last evening in Little Rock saw me taking a trip to Riverfront Park, a truly impressive use of public money. First of all, there are these spectacular views of the bridges at night, psychedelically illuminated by about a half-million LED’s (I tried counting, but quickly gave up):

This, obviously, called for an epic pose:

Then, there were several delightfully surreal and bizarre sculptures to be found scattered around the area. Like this one:

And then there is a massive playground that made my inner child gleeful. It’s something like a combination of an anthill and playground equipment, with tunnels all over the hillside leading to various slides and jungle gym-type apparatuses. You’d really have to be there to appreciate the scope of it. One particular piece presented a photo opportunity, so I asked Katie to give me something majestic. I got this:

Not exactly what I was looking for, so we tried again:

And so, Little Rock was a medley of wondrous and, erm… interesting experiences. A successful stop, all in all. I loaded Yolanda back up and proceeded to head westward again, leaving behind new friends and old, and leaving Katie to complete her latest project…

…which you can all learn about here. And you should, because this woman has more talent in her little finger than I have in my entire biomass.

And thus, having no further concern, my journey continued….. 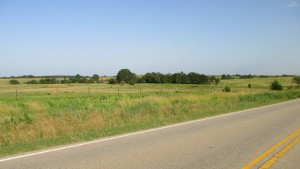 …..right the fuck into no-man’s land.

What can one say about Oklahoma and Kansas that hasn’t already been said about anterior of Purgatory? I would like to tell you that these two places were more than mind-numbing drives through endless, featureless terrain; seemingly never-ending stretches of asphalt toward a grim and unfeeling horizon. I would like to tell you these things. But that would make me a fucking liar.

Again, this probably isn’t fair. I only saw these places from the highway, and the unsettling nature of endless plain made me particularly eager to get the hell out of them. But man, that is a WHOLE lot of nothing. If there’s anything to commend these states, by all means let me know, because I didn’t find it. I didn’t want to find it. The process of looking for it would have been such an existential nightmare I doubt I would’ve come back sane. The entire experience was surreal.

There were only two bright spots to this journey. One was Lincoln County, Kansas. For some reason known but to the gods of this blasted land, this particular area is an oasis of green grass, actual terrain, and natural beauty in the heart of endless brown prairie.

It was a welcome mental break from the monotony, I’ll give it that much. Also, wind turbines. SO many fucking wind turbines. They were everywhere. Invest in wind power. Every square inch of this place was covered in these things, and I passed two fully loaded trains that were hauling nothing but the blades to build MORE wind turbines.

And then, just as I was about to cross into Colorado, at a rest stop in the middle of nowhere, things took a turn for the surreal. I’m sitting in my car, checking the map and trying my best to maintain my sanity…. When motherfucking KMFDM pulled up next to me. Seriously. The whole band, piling out of a van at this rest stop. This is it, I figured. Kansas finally made me snap.

But I asked, just to make sure I wasn’t going crazy. And it was them, yes. Tour bus broke down in Kansas, poor bastards, and they had all their gear loaded into a U-Haul, several hours late for a show in Denver. As of this writing, I’m still not sure if they made it, but I sincerely hope so.

Oh, and for all of you who are going to scream “pics or it didn’t happen”, go fuck yourself. I’m not a paparazzi. Besides, they were in a hurry, obviously irritated, and Sascha K still looks like he could crush a man’s skull with very little effort. Thus far, however, this is easily the most random thing that’s happened to me on this journey. We’ll see if anything tops it.

And with that bit of weirdness, I shook my head, shrugged my shoulders, and crossed the line into Colorado. The story continues from here, and I intend to spend several days in the Denver area doing some writing.