[NOTE: Yes, I’ve been lying low for more than a month. Yes, I’m back to semi-regular updates. Yes, I’m still writing. No, I’m not on the road, my traveling has paused for the winter. Yes, I still have stories to tell from the great American highway. Yes, I will. No, I will not father your children (most of you). That is all.] 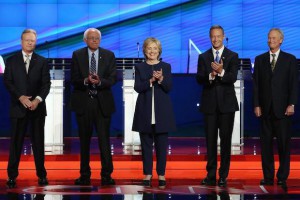 So, the nominees for the Democrat side of the Presidential ticket had a debate nearly two weeks ago, and I watched it. Fortunately for everyone, I took notes. Unfortunately, it took me this long just to shake myself out of the internal mental screaming that followed the event so I could actually write a little about it. Now that the tortured wailing of my psyche has calmed down a bit, we can have a review. I sincerely hope everyone is ready, because I might need another round of therapy after muddling through this mountain of “holy shit these people want to be the President”. Remember, I do this for you, gentle reader. The tip jar is still on the left.

It seems appropriate to start with the candidate who has, in the least surprising bit of political news of the past week, already dropped out of the race. Former Senator Jim Webb’s performance in last week’s debate was nearly the most awkward thing I’ve seen since losing my virginity, and involved twice as much nervous stammering.

From the outset, when he introduced himself to America by touting his record of “accomplishing different things” (wow), to the moment he answered a final group question by stumbling over a description of that time he totally killed an NVA soldier who had the audacity to throw a grenade him, Jim Webb seemed to be doing everything he could to alienate himself from the Democratic base, if not regularly-adjusted humanity in general.

To be fair, Webb is a guy of staggering intelligence and fortitude. He’s a military historian, has written ten books on the subject, and taught at both the US Naval Academy and Harvard. He’s also got enough combat medals and citations to write an action movie script, and probably possesses more foreign affairs experience than anyone onstage except Hillary.

Unfortunately, none of those attributes translate into a guy that can work a political image in his favor. By the end of it, Jim Webb looked as uncomfortable being there as he made everyone else feel. Given his comments on the subject, maybe he’s a little more in tune with general consensus than he seems. Either way, he’s out of the race, and the less said about this false-start of a campaign, the better. 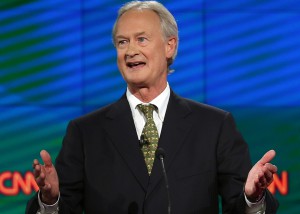 Did you know who Lincoln Chafee was before the debate aired? Me neither. Apparently, he’s from Rhode Island, and he used to be a mayor there, then a Senator, then the governor of the state. Did you know that Rhode Island was still a part of the United States before the debate aired? Me neither, I had to google all that shit. So…. yeah. Shout-out to Rhode Island. Glad you’re still with us. Don’t hear a whole lot from you guys. Keep it real.

The debate established two memorable things about Chafee. First, he changes party affiliation more often than I change mobile phone carriers (literally). He’s been a Republican, an Independent, and now finally a Democrat. I’m only sorry the Whigs aren’t still around, so he could check them out next. Chafee is either the least welcome guy around the party clubhouses, or a man who stands on principle. Either of those things is enough to disqualify him for the Presidency.

The second thing was that Chafee’s point of pride coming into this was a complete lack of scandal over the course of his political career. While this was clearly meant as a dig on Hillary, it remains a pretty sad fact of American politics that “hasn’t had a scandal” counts as a positive point for electability and not just, you know, a bare minimum for any public office higher than Rowan County Clerk of Court. Unfortunately, the spin he put on it came off less like “look at all the integrity I have” and more like “holy shit I’m so boring you may as well skip your ambien tonight”. 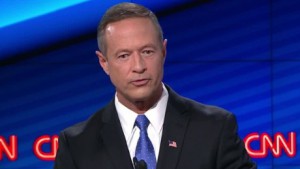 Coming directly out of his previous job as the governor of Maryland was Martin O’Malley. This is not a guy who likes downtime. Since 1991, he’s been a Baltimore city council member, the mayor of that same city, and then the governor of the state without so much as a year in between to just chill the hell out. Somewhere in that time, he managed to become one of the major influences for the Tommy Carcetti character on “The Wire”, who was played by the guy who would go on to portray Littlefinger on “Game of Thrones”. Make of that what you will.

I have a strong suspicion that O’Malley is an issue candidate. He seemingly turned every question into an excuse to talk about renewable energy like he was in the pocket of Big Solar (TM). This theory is only mitigated by the fact that I’m not entirely sure there’s even such a thing as Big Solar. Given his pattern, he’s more than likely using this hopeless campaign to interview for his next job. He seems to be shooting for Secretary of Energy under whoever winds up in the White House. Maybe he’s just looking for a job where he can finally stop getting shit on by David Simon. 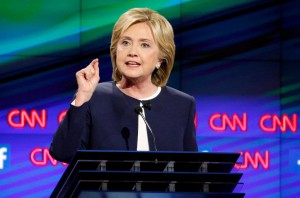 And here we go again.

The latest entry into the Clinton Machine’s incessant effort to dominate all of American politics took to the stage in grand fashion. Hillary version 4.0 seemed to be a refined version of all the best aspects of the model’s previous iterations. She possessed the whimsical charm of Hillary the Candidate’s Wife and Hillary the First Lady (versions 1.0 and 1.5, respectively), the stoic resolve of Hillary the Faithful Wife (version 2.0), the blank unoffensive nature of 2.7’s Hillary the Senator, and the gregarious charisma of Hillary the ’08 Candidate and Hillary the Secretary of State (3.0 and 3.5). Truly, her programmers and image consultants have a lot to be proud of.

In keeping with her chameleonic ability to morph into whatever kind of politician she needs to be, Hillary pulled a “wasn’t me” on the first question. Anderson Cooper, who was generally about as useful in this debate as the referee at a WWE event, asked her point blank if she’ll say anything to get elected. Clinton managed to turn her answer into a six-minute long bragging session on her “consistency”. That was such a vintage example of Clinton-style bullshittery, I had a 90’s flashback and briefly forgot what my definition of “is” is.

The impressive thing about the former Goldwater Girl’s performance was an ability to interweave her usual political brutality into this newly-found warm and fuzzy image. Without making it obvious, she took Bernie Sanders to task on his less-than-hard-line gun control record by referencing a mass shooting that was less than a month old.

With “only” a D rating from the NRA on the issue of pumping as many assault weapons as possible into the responsible hands of the American public, clearly the dead bodies in Roseburg were Bernie’s fault, after all. Nothing like leveraging the fresh tears of grieving families to score points against the guy who’s trouncing your poll numbers. Classy.

Anyone with musical talent can feel free to complete that song and post a video of their performance in the comment section.

Yes, the darling of the internet came out swinging, or at least wildly gesticulating like Doc Brown talking about gigawatts of power. Senator Bernie Sanders clearly arrived at this debate with a message, and he wasn’t gonna let little things like volume control get in the way of that.

Bernie is not what you’d call a “realistic” candidate. Though his ideas obviously resonate, and might even be amazing if implemented, he seemed far more interested in outlining a vision for a new America than he was explaining how we were going to make the rest of Washington implement it. Even Jim Webb managed to shake himself out of torpor long enough to point out that Congress has to agree to all this shit before before we go shifting government spending toward domestic investment and away from bombing brown people. I’m paraphrasing, mostly.

On an impressive note, Bernie managed to work the crowd despite evoking the persona of an old man yelling from his front porch. At any given moment he sounded half a breath away from ordering Anderson Cooper off his lawn, and really, who could blame him?

But the most telling moment of the night was, unsurprisingly, the most misinterpreted by the punditry. Seriously, I stopped trying to figure out a long time ago which political commentators on the cable channels were willfully accepting scripted dialog and which really are that fucking daft.

Regardless, Bernie’s “everyone is tired of hearing about your damn E-Mails” moment was illuminating for a couple of reasons. First of all, it was the most factual statement I heard all night. Secondly, it showed a level of political acumen I didn’t know the man possessed. Rather than being “helpful to Hillary” as the talking heads seemed convinced, it was a subtle attempt to shut any talk of Clinton controversy down that night.

And good for him. Because Hillary knows from experience that nothing fires up the Democratic base as much as reminding everyone just how far the GOP will go to drag her in front of a committee for some insignificant reason or another. A protracted discussion of yet another Republican media circus starring Hillary Clinton would have only helped her that night, and Bernie knew it.

So maybe he’s not entirely the batty old man I thought he was. Maybe he DOES know how to work the political system to achieve nigh-impossible goals. He’s certainly been hanging around Congress long enough to have learned. And shutting down Hillary’s self-serving review of just how much the other side can’t stand her definitely qualifies as “nigh-impossible”.

All I know for certain is that we can all start counting the days till Chafee and O’Malley go the way of Jim Webb and into the category of “former Presidential candidate”. As for Bernie and Hillary, time will tell.

I will say that in the weeks since I did my write-up on the slowly diminishing GOP field of nominees, I’ve changed my wish list. Rand Paul is proving to be about as interesting as Norwegian television, and Donald Trump is proving to be cleverer than I thought. I now sincerely wish for a Trump vs. Sanders general election. If nothing else, I’ll have shit to write about through next November.