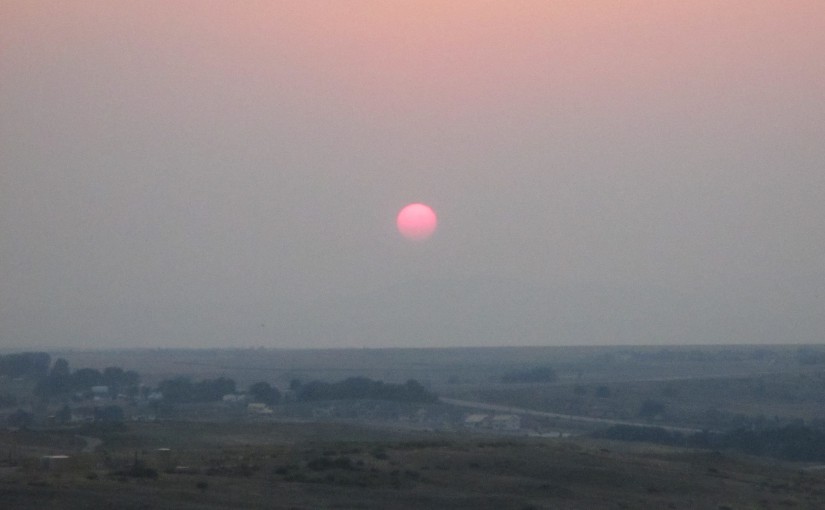 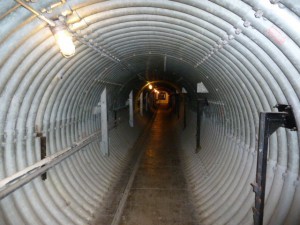 Less than an hour north of Denver lies a small, fairly unremarkable town called Greeley. It is one of the endless stream of places that might fly past a car window, little more than another exit on the endless American highway. I would never have known it were there, much less stopped, had the internet not provided a lead on a cheap camping spot. Cheap spots to sleep are always welcome for a lone wanderer, and this particular site had the added bonus of sharing land with an old nuclear silo. How could I say no to that?

Despite the fact that camping near an old nuclear site is practically begging for zombies, I headed toward Greeley, ably navigated down a few back roads by Google Maps’ confident voice. It was quiet, out of the way, and fairly deserted; a perfect spot to rest for the night. When I pulled onto the access road, I discovered that I had wandered onto a piece of history. 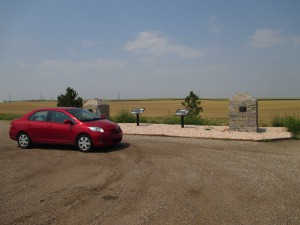 Those pillars next to Yolanda are all that remain of Camp 202. During the Second World War, it housed nearly four thousand German POW’s, most of them captured from Afrika Korps. Sent over in waves as Erwin Rommel’s defenses were collapsing, they would occupy what amounted to a minor city at the time. They were given jobs, primarily in agriculture due to wartime labor shortages, a place to live, and even paid with money they could send to their families back home. After conversing with the local county maintenance man, I learned that some of them liked it so much they stayed, settling in the area, and their descendants could be found around town today. I recalled the family I had seen in the gas station parking lot on the way in, the one with four incredibly blonde-haired children running around the minivan, and wondered.

Only the pillars are left to attest that the place ever existed. A couple of plaques mark the spot, a ruin that you’d have to be looking for to find, or else stumble across randomly as I did. Next to one of them could be seen a carving, presumably left by one of the prisoners:

My grandmother’s brother was named Marvin. He died at Kasserine Pass, one of thousands of American boys who lost their lives that day, overrun by the vastly more experienced wehrmacht. Did the man who killed my great uncle wind up at Camp 202? Was his family still living nearby? Did he carve this graffiti when he was released? There is obviously no way of knowing, but these were the thoughts that wandered through my head when I found myself amongst unexpected history.

Up the road, I found the campsite itself. The missile silo was sadly off-limits without a pre-arranged tour, but the view was spectacular. I had a sunset, a place to rest, and a few locals for company.

The county worker who told me about the camp was a nice guy, and content to chat about the site for a while. He warned me not to drink the well water, something I had no intention of doing anyway. And so I sat, near the former home of a world-ending weapon of mass destruction, cooking a simple meal on a picnic table and letting my thoughts wander. 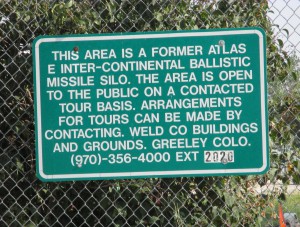 I thought of Missileers past who had manned this location. Two by two, working in shifts underground, their whole purpose in life had been to remain alert, waiting for the signal to turn a set of keys that would end civilization. I thought of the men and women who still do this job, of the active warheads still targeting god-knows-where inside of Russia. And I thought of the people who live their whole lives near sites like this, never knowing that there is a warhead on the other side of the planet, designated just for their home, targeting the hellish weaponry that their government tries to keep hidden from view.

I remembered the story of Stanislav Petrov, the Soviet Air Defense officer who refused to report an attack when his early warning system malfunctioned, showing a half-dozen missiles coming over the North Pole from the United States. He rightly assumed it was an error, broke his protocol and training, and saved us all from the horror of a full-scale nuclear exchange, less than two weeks after my sixth birthday.

Are both our weapons systems still automated, I wondered? Would there be any sort of fail-safe in place if something went wrong, a Petrov on either side to correct any errors? Or would all our remaining warheads launch, Dr. Strangelove-style, to carry out a war that no one ever, ever wanted to fight? Was the Greeley site still listed as a target in whatever aged Russian database determined their missiles’ course? Would I go to sleep in my tent that night, only to be evaporated on first contact, a casualty like great uncle Marvin? The Cold War has been been gone nearly thirty years, and most of us don’t realize that in many ways we still dance along the edge of civilization’s final sunset. That night, in that place, it was a reality that was hard to ignore. 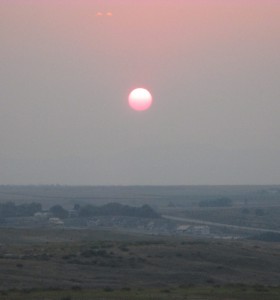 In the end, of course, these were just the idle and morbid thoughts of a lonely traveler, passing through the remnants of conflicts past, motivated to introspection by the layers of history that had been found off a random highway exit in Colorado. In a way, it threw me back to childhood, growing up with the reality of that endless threat always in our minds. We were a generation who were sung the songs of our ancestors’ war against the great fascist evil across the sea. We were the last generation who drilled for missile attack, constantly reminded by authority that death and chaos were at all times hours away.

I recall once being concerned about these things, and asked my father what would happen if the fire should actually start to fall. Ever the philosopher, he replied that there was no way of knowing. All he knew, he said, was where he would prefer to be if and when that happened. I asked him where, and his reply was concise.

“Under the first bombs.”

I slept well that night.